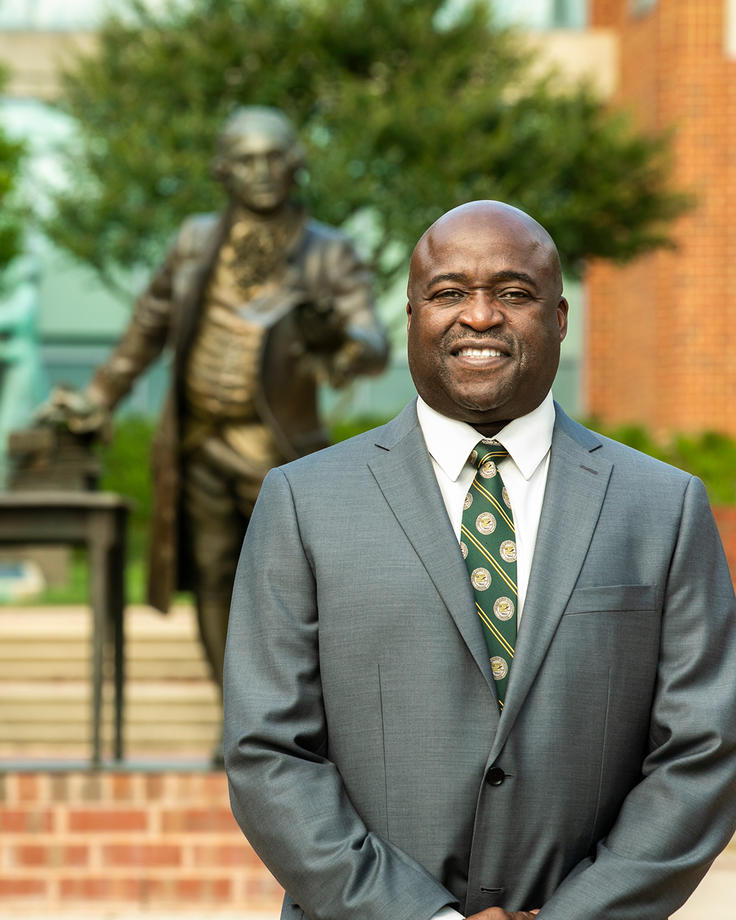 Washington, the former dean of the Henry Samueli School of Engineering at the University of California, Irvine (UCI), and former interim dean of the College of Engineering at Ohio State University, is regarded nationally as a strategic and collaborative solutions-oriented leader who is committed to providing opportunities for students of all backgrounds.

In his seven years at UCI, Washington expanded undergraduate enrollment in the engineering school by 1,100 students and graduate enrollment by more than 200. He led a freshman experiential learning initiative that resulted in more than 60 percent of undergraduate engineering students conducting research. He established the University of California’s first student makerspace and helped establish the OC STEM Initiative, one of the nation’s first STEM ecosystems, which impacts more than 100,000 students each year in Orange County, California. He also launched a regional effort to help community college students transfer to four-year institutions.

Committed to multidisciplinary scholarship and research, Washington created new graduate and undergraduate programs with the UCI business and humanities schools and led the development of the Horiba Institute for Mobility and Connectivity to advance next-generation advanced mobility systems. He played an integral role in the development of the planned Interdisciplinary Science and Engineering Building, a facility that will expand UCI’s research capacity.

Washington recruited and hired one of the most diverse engineering faculty cohorts in the country, with more than 40 percent of his 60 hires being women or from underrepresented groups. He’s raised more than $100 million in public and private philanthropy for the engineering school, including more than $15.5 million in gifts targeted to reach more diverse student populations.

Washington launched his academic career in 1995 as an assistant professor in the Department of Mechanical and Aerospace Engineering in the College of Engineering at Ohio State University. He became an associate professor in 2000 and a professor in 2004. He began serving as the college’s associate dean for research in 2005 and also led the university’s Institute for Energy and the Environment. From 2008 to 2011, Washington served as interim dean of the Ohio State engineering school, one of the largest in the country.

Washington is an accomplished researcher and educator who specializes in dynamic systems, with an emphasis in the modeling and control of smart material structures and systems. He is the author of more than 160 technical publications in journals, edited volumes, and conference proceedings. At Ohio State, Washington received the Alumni Award for Distinguished Teaching, the Harrison Faculty Award for Excellence in Engineering Education and the Lumley Research Award. He also received the National Science Foundation (NSF) Faculty Early Career Development (CAREER) Award.

Washington has conducted research for NSF, NASA, General Motors, the Air Force Research Laboratory, and the U.S. Army Research Office, among others. He has served as a member of the U.S. Air Force Scientific Advisory Board, NSF Engineering Advisory Committee, Institute for Defense Analyses, the Octane Board of Directors and other boards. Washington also is past chair of the Engineering Deans Council of the American Society for Engineering Education and a Fellow of the American Society of Mechanical Engineers.

A first-generation college graduate, Washington is a New York City native who attended high school in North Carolina. He earned bachelor’s (1989) and master’s degrees (1991) and his PhD (1994), all in mechanical engineering, at North Carolina State University. He is a member of the NC State Engineering Foundation’s Board of Directors.